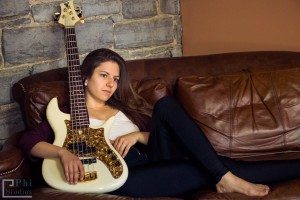 Alyssa Dupuis has been working in the Toronto music scene for several years now. She began playing bass at eleven years old in a family band led by her father, but later studied jazz vocals at Mohawk College. Today, Alyssa travels all over North America with various tribute acts, including her own Shania Twain tribute. She is proud to represent F Bass and Bergantino Audio Systems on stage every night.

“Alyssa’s musical prowess, zeal and preparedness was instantly obvious but only the first of many attributes revealed over time. Her expedient adaptivity to styles, roles & arrangements combined with the highest professional and personal standards are the best in the business.” – Rob Kilian